Jeremy ‘Yongurra’ Donovan is a proud Kuku-Yalanji man with family connections to several other language groups.

Jeremy is highly motivated to elevate the lives of Aboriginal and Torres Strait Islander people and brings a high level of experience and expertise in the field of Indigenous disparity to the role of Partnerships Coordinator at MG Corporation.

For several years, Jeremy worked with GenerationOne, a national movement to end employment disparities between Indigenous and non-Indigenous people in one generation, holding a number of roles, including CEO.

An accomplished artist, poet and didgeridoo player, Jeremy has performed locally and internationally, including being contracted to perform at Australian embassies around the world to help promote Aboriginal culture by the Department of Foreign Affairs and Trade. 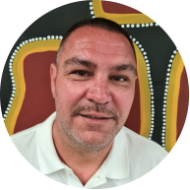