In his position as the 100+ Jobs Initiative Manager, Keith is tasked with assisting at least 100 of the East Kimberley’s most disadvantaged Aboriginal people to become job-ready and find employment.

Keith hails from Mossman in far north Queensland but has had several stints living in Kununurra since first moving here in 1999.

Keith’s work history includes being employed as a teacher’s aide at East Kimberley College and North Regional TAFE as the Aboriginal Development Officer. He also spent time as an advisor for the Prime Minister and Cabinet (Indigenous Affairs) office in Kununurra.

After working with the Department of Finance in Canberra, Keith moved back to Kununurra where he took up his present role heading up the 100+ Jobs Initiative. 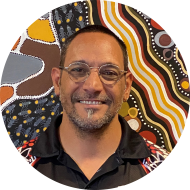